“Hamas is regularly described as ‘Iranian-backed Hamas, which is dedicated to the destruction of Israel.’ One will be hard put to find something like ‘democratically elected Hamas.’

“You can’t have occupation and human rights” at the same time.

Israel has contributed so much to the world – what has Hamas done for the world except cause holy hell.

“People gather in giant rooms like this, deliver fancy speeches, but nothing ever changes. They still hate, they still fight. All we do, despite all our efforts, is put a pause to it, to bury all the dead. People are still the same, the rage inside them is still the same. What we do is not a cure, but mere bandages on the corpses, utterly useless.”

And money continues to go down the “rat” hole and the Democrats still revel in having war raging somewhere in the world to distract their own wrong doings on their own citizens. 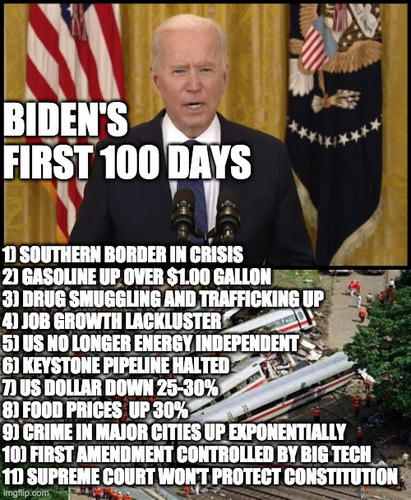 Independent Voter site Balladeer’s Blog can’t help but notice that the corrupt and senile Joe Biden has been far worse than advertised. His all-out war on the working class and the poor has inflicted untold suffering around the nation. His hate-filled and racist travel ban against India is a disgrace. Biden has been the most hate-filled and divisive president imaginable as well as being one of the worst for the poor and needy. A disaster like Joe Biden and his ilk should never be wished upon any country.

BIDEN AND CONGRESSIONAL DEMOCRATS MORE INTERESTED IN HELPING THEIR WEALTHY FRIENDS THAN HELPING THE POOR AND NEEDY. Democrats stopped being the party of FDR and JFK long ago.

“BIDEN HAS THE WORST HUNDRED DAY START OF ANY PRESIDENT EVER”.

EVEN MORE BIDEN BEFUDDLEMENT AND INEPTITUDE.

POLL: PUBLIC RIGHTLY BLAMES BIDEN AND HIS REGIME FOR THE DISASTER AT THE SOUTHERN…

Enjoys sports and all kinds of music, especially dance music. Playing the keyboard and piano are favorites. Family and friends are very important.
View all posts by kommonsentsjane →
This entry was posted in Uncategorized and tagged KOMMONSENTSJANE - JOE BIDEN ATROCITY ROUNDUP: MAY 17th. Bookmark the permalink.