KOMMONSENTSJANE – “New Bolsheviks” of Antifa and BLM Riot in Seattle, Break Into Amazon Go…Why This is Happening Now.

Brought to the U.S. under the courtesy of the Obama/Pelosi/Schumer Democrats to further their agenda called the COUP.

It is time for the Constitution to fall into play. 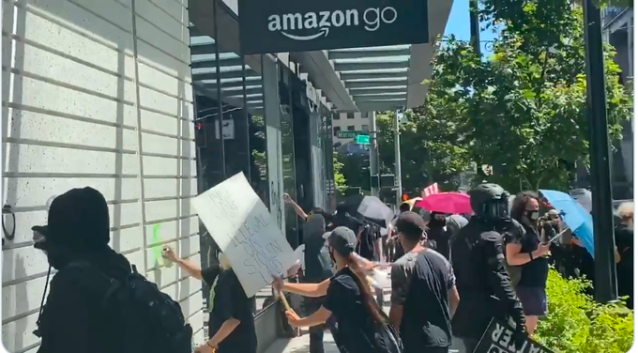 How dare you call them rioters?!? They’re undocumented shoppers. https://t.co/VrxnaRoEou

At least two people were arrested in Seattle and a police officer is in the hospital Sunday after a march through downtown devolved into property damage and looting, police say.

Police said Sunday evening the demonstrators had broken out several windows of the East Precinct, then threw a device into the lobby that ignited a small fire.

The fire was later extinguished and no injuries were reported, police said.

The demonstration started between 2 and 3 p.m. near the intersection of 3rd Avenue and Pine Street. A photo posted on Seattle’s DOT traffic channel showed crowds blocking an intersection.

Around 2:30 p.m., Seattle journalist Katie Daviscourt tweeted a video of a crowd of people outside an Amazon Go building. Several people were seen spray-painting the building while others tried to smash the windows.