Posted on June 3, 2020 by kommonsentsjane 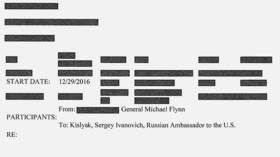 Transcripts of conversations with Russian Ambassador Sergey Kislyak show that incoming National Security Adviser Michael Flynn was looking out for US interests and sought Russian help against terrorists, while the FBI framed him.

Flynn and Kislyak spoke several times in December 2016 and January 2017, during the presidential transition. Within days of President Donald Trump’s inauguration, the FBI interviewed Flynn with an intent – as shown by recently published documents – to catch him in a perjury trap. After a description of his call with Kislyak was leaked to the Washington Post, Flynn was accused of misleading the White House about the calls and pressured to resign.

Those invested in the ‘Russiagate’ conspiracy theory have claimed for years that Flynn discussed easing US sanction against Moscow.

Enjoys sports and all kinds of music, especially dance music. Playing the keyboard and piano are favorites. Family and friends are very important.
View all posts by kommonsentsjane →
This entry was posted in Uncategorized and tagged Kislyak warned Trump "Russiagate" was targeting him., kommonsentsjane - EXPLOSIVE - transcripts show Flynn wanted to work with Russia against ISIS. Bookmark the permalink.