KOMMONSENTSJANE – Dem Politicians in Cities Scheduled for Ice Raids Will Not Cooperate With Agents.

Schumer/Pelosi/governors are aiding and assisting the illegals who are breaking the law. They all need to be impeached for insurrection. They are not upholding the Constitution.  What good are our laws if the government doesn’t enforce them?

Since the governors won’t cooperate then the President has to take stronger measures to make these rogue governors comply with the law and it should have  been done earlier.

The “Insurrection Act” is an umbrella term for a series of statutes that date all the way back to the Founding, and through which Congress has exercised its authority under Article I, Section 8, Clause 15 of the Constitution “to provide for calling forth the Militia to execute the Laws of the Union, suppress Insurrections and repel Invasions.” The Constitution’s drafters understood that there would be circumstances in which local authorities were inadequate to protect the populace and enforce the laws.

And this is that time. 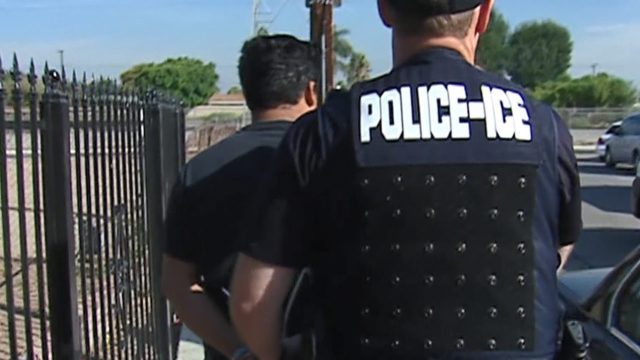 Illegal Immigrant Cheerleading Squad Captain Pelosi refers to deportation of illegal immigrants as “an act of utter malice and bigotry.”

Federal immigration agents shouldn’t expect cooperation from local authorities when they begin a mass roundup of migrant families with deportation orders, an operation slated to begin Sunday at the direction of President Trump.

Several elected officials in cities expected to be targeted by U.S. Immigration and Customs Enforcement (ICE) have either condemned the impending arrests or said they won’t allow local resources to be used to assist the federal agents.

The operation is expected to target 2,000 families in up to 10 cities, including Chicago, Baltimore, New York, Houston, Los Angeles and Miami. On Monday, Trump announced via Twitter that ICE would be “removing the millions of illegal aliens who have illicitly found their way into the U.S.”

Enjoys sports and all kinds of music, especially dance music. Playing the keyboard and piano are favorites. Family and friends are very important.
View all posts by kommonsentsjane →
This entry was posted in Uncategorized and tagged Kommonsentsjane - Dem politicians in cities scheduled for Ice raids will not cooperate with agents... Bookmark the permalink.