It is time to require our candidates to have an IQ test and vetted by a doctor. 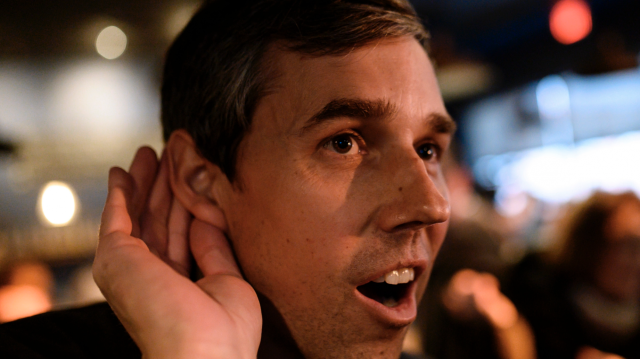 A new profile piece from The Washington Post on Democratic presidential candidate Beto O’Rourke documented multiple instances of highly disturbing behavior from the failed Senate candidate, including eating dirt and taking poop from his kid’s diaper and putting it into a bowl and telling his wife that it was an avocado.

The piece specifically focused on Beto’s marriage to his wife Amy, who indicated that she was not exactly thrilled to be in a marriage that was so heavily involved in politics.

Buried deep in the article was a paragraph that documented his “‘Psycho’-style scares in the shower,” and another bizarre incident from their marriage. The Post reports:

One time, according to a friend, Beto collected an especially verdant turd from one of their kids’ diapers and put it in a bowl, telling Amy it was avocado. (Neither would confirm this, though Beto did allow it sounded like something he’d do.)

The Post also documented how Beto dealt with his loss to Cruz last year in the Texas Senate race, noting that he was “more prone to higher highs and lower lows” than his wife. The Post adds:

In January, Beto hit the road, much as his father had done before him, and drew energy from the people he met, and — on one stop in New Mexico he didn’t write about in his blog — by eating New Mexican dirt said to have regenerative powers. (He brought some home for the family to eat, too.)

These strange examples of behavior from Beto are just the most recent incidents to surface as a Reuter’s report from late last week also documented deranged thoughts from Beto’s past.

Reuters’ report, which focused on the revelation that O’Rourke was involved in a hacker group growing up, also highlighted writings from him that are reportedly still available on a chat board he created.

“One day, as I was driving home from work, I noticed two children crossing the street,” O’Rourke wrote. “They were happy, happy to be free from their troubles…. This happiness was mine by right. I had earned it in my dreams.”

“As I neared the young ones, I put all my weight on my right foot, keeping the accelerator pedal on the floor until I heard the crashing of the two children on the hood, and then the sharp cry of pain from one of the two,” O’Rourke continued. “I was so fascinated for a moment, that when after I had stopped my vehicle, I just sat in a daze, sweet visions filling my head.”

Reuters also noted that O’Rourke reportedly fantasized about “toppling the government,” but doubted that “the masses would support such a radical move at this time.”

In a seperate report published later that night, Reuters admitted that the reporter who broke the story — which was a part of a book that he was writing — had the story for nearly two years and told O’Rourke that he would not publish it until after his Senate run.

Hippies from the 60’s might even react with their favorite social cry of “FAR OUT”, when learning some of the statements from or past actions of Beto O’Rourke.  Hippies were not easily scared back in the day, but most of the time they were high on weed and “Everything was (is) beautiful in its own way”.    Beto may have just that personality that even the hipsters would fear, they’d be afraid he’d slip in some poop in their stash of hash.

Seriously what kind of person puts baby poop in a food dish for their spouse?  I see signs of a Hannibal Lecter type, or in this case Cannabis O’Rourke with a psychological disorder of:  Schizotypal Personality Disorder.

What Are the Symptoms of Schizotypal Personality Disorder?

Enjoys sports and all kinds of music, especially dance music. Playing the keyboard and piano are favorites. Family and friends are very important.
View all posts by kommonsentsjane →
This entry was posted in Uncategorized and tagged Kommonsentsjane - Beto O'Rourke - serious mental disorder - gives baby poop to his wife.. Bookmark the permalink.