Posted on February 15, 2016 by kommonsentsjane 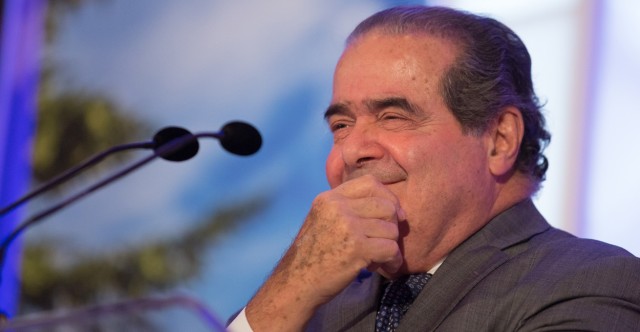 What Scalia Taught Us

More than 100 men and women have been justices of the Supreme Court. All decided the outcome of individual cases and made small changes in the law.

Some—such as Joseph Story, Oliver Wendell Holmes, Hugo Black, Earl Warren, William Brennan, and William Rehnquist—will be remembered for moving the Supreme Court in one direction or another.

They launched the court into its existence as an institution. They addressed some of the most important issues that can arise under our Constitution—issues involving the separation of powers, freedom of speech and religion, the integrity of the criminal justice process, and the relationship between government and the nation. They established the Supreme Court—rightly or wrongly—as one of the most powerful institutions in our nation. Their tenure still has a powerful effect today.

But even fewer justices changed the course of the law. John Marshall was one. Antonin Scalia was another.

For him, the law was a tablet whose meaning could be discerned by focusing on the meaning of the words it contained, rather than by asking ourselves what we want it to mean. The latter, he said, was the stuff of politics, not law, and he drew a line in the sand between the two.

He maintained that view of a judge’s role even when it was unfashionable to hold that belief because it may lead to outcomes we may not like. But he believed that it was his duty to uphold the rule of law, because only that rule separated us from the many nations on the Earth governed by the rule of might.

Robert F. Kennedy once said that the privilege of public service carried with it the opportunity to bend history.

Not only did Antonin Scalia bend it; he turned it in a different direction. We will be forever grateful to him for that. Requiescat in peace.

Nine Zingers From the Sharp Mind of Justice Antonin Scalia

“A law can be both economic folly and constitutional,” Supreme Court Justice Antonin Scalia, pictured here at a Heritage Foundation event in October 2015, once said.

Justice Antonin Scalia, who died Saturday during his 29th year on the Supreme Court, was known for a sharp wit as well as a brilliant legal mind, and he expressed both with his tongue as well as his pen.

Here is just a sample:

1. “What is a moderate interpretation of the text? Halfway between what it really means and what you’d like it to mean?” (Remarks at Woodrow Wilson International Center for Scholars, Washington, D.C., 2005.)

2. “There is nothing new in the realization that the Constitution sometimes insulates the criminality of a few in order to protect the privacy of us all.” (Majority opinion, Arizona v. Hicks, 1987.)

3. “God assumed from the beginning that the wise of the world would view Christians as fools … and he has not been disappointed. … If I have brought any message today, it is this: Have the courage to have your wisdom regarded as stupidity. Be fools for Christ. And have the courage to suffer the contempt of the sophisticated world.” (Speech at Living the Catholic Faith conference, 2012.)

6. “A law can be both economic folly and constitutional.” (Concurring opinion, CTS Corp. v. Dynamics Corp of America, 1987.)

7. “If we’re picking people to draw out of their own conscience and experience a ‘new’ Constitution, we should not look principally for good lawyers. We should look to people who agree with us. When we are in that mode, you realize we have rendered the Constitution useless.” (Speech, Wilson Center, 2005.)

8. “It is one of the unhappy incidents of the federal system that a self-righteous Supreme Court, acting on its members’ personal view of what would make a ‘more perfect Union’ (a criterion only slightly more restrictive than a ‘more perfect world’) can impose its own favored social and economic dispositions nationwide.” (Dissent, United States v. Virginia, 1996.)

9. “Bear in mind that brains and learning, like muscle and physical skill, are articles of commerce. They are bought and sold. You can hire them by the year or by the hour. The only thing in the world not for sale is character.” (Commencement address, College of William and Mary, 1996.)

Lyndsey Fifield contributed to this report. It has been modified to substitute one quotation and specify the context for each.

May he rest in peace!  We will certainly miss him on the bench.